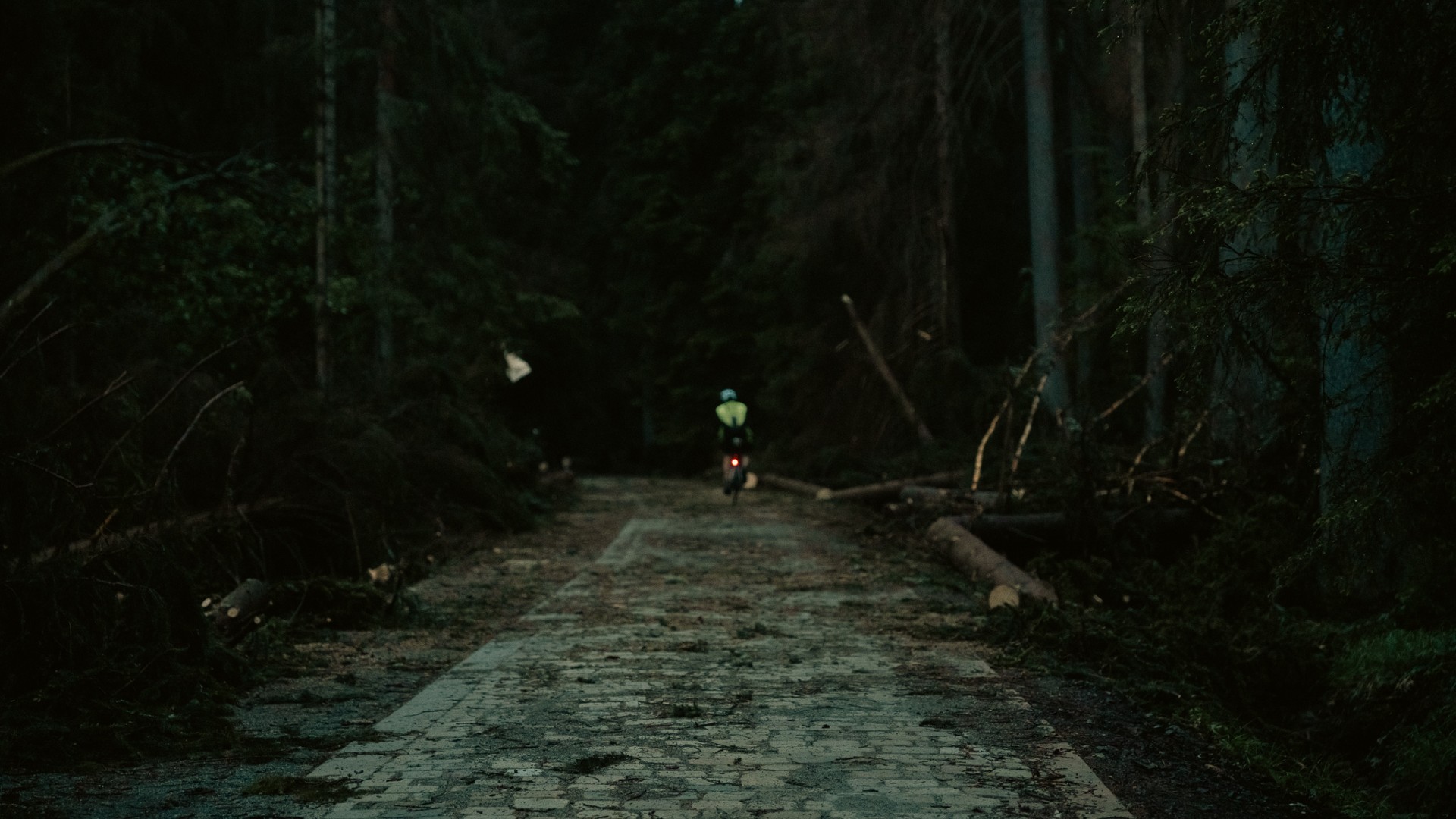 A 1500km bike race is never going to be easy but I was feeling pretty relaxed at the start of RTPL.

My bike is tried and tested, the culmination of years of learning and incremental improvement so should be perfect by now – right?

I might as well have walked into Evans and bought their cheapest child’s tricycle. We’d barely left Krakow when the seatpost started slipping, and I snapped my multitool trying to tighten it – fortunately I had a spare hex key but still had to stop another five or so times before it was sorted. If that had been the only problem, I wouldn’t complain but throw in a chain that was skipping like Rocky Balboa and a Wahoo that was about as sharp and the first few hours were tough going.

I’ve long been thinking that I have too much carbon fibre on my bike, and it turns out my drivetrain agrees. After missing a downhill turn thanks to the laggy Wahoo I mashed my gears to turn round back up the slope, and dropped the chain so it jammed between the little ring and the BB shell, forcing it out scoured strips of carbon off the frame and bent the chain ring – guaranteeing this would happen again (it did, many times).

Next came the rain, so heavy that I cut out the middleman of the entire water table, and was hydrated straight from the source via my face and glasses. I kept moving, and eventually the sun came out, the scenery and terrain got more interesting and I was really starting to enjoy myself.

That was my first mistake… my second (and arguably more rubbing pressing) was not changing my shorts earlier. By late afternoon I had some pretty bad chafing from where the pad of my Gore shorts just hadn’t dried out. I stopped and changed into my spare Invani shorts and put my wet ones onto my saddlebag to dry out. Yes, yes they did immediately fall into the wheel and get caught in the brake calliper.

Just how bad the saddle sores were, I didn’t really realise until 1am that night when I sat on the edge of my hotel bed and then stood up. If you’ve ever tried frying cheap bacon in a non-non-stick frying pan, you’ll have a good idea of what it was like peeling me and the bedsheets apart. Some liberally applied alcohol gel, and 3 more hours sleep later my arse wasn’t exactly fixed, but it was possible for me to sit on the saddle without crying (too much).

I managed a few hours riding (mostly out of the saddle) before my chain decided enough was enough and snapped in half. Looking behind me halfway up a hill to see the disjointed metal snake lying on the road was not a high point, although I do like to use everything I take with me so if I were forced, under duress, to find a silver lining I guess it was nice to give my chain tool a run out for my first time in a race…

On the third day, whoever was wielding the voodoo doll took their eye off the ball, and things went pretty well for me. Climbing into the Tatras at 2am with the full moon hanging between the pine trees was like something straight out of a Bram Stoker novel but other than one tangle with a songbird on a descent no winged menace came out of the night sky for me. By that evening I was just 386km to the finish – it felt like my luck had turned – and I knew whatever happened I’d finish the job tomorrow.

The sun shone, I averaged 32km/h, and knocked the distance off in 12 hours flat.

Obviously, that’s not how it went…

After three days of riding out of the saddle to spare my sores, my Achilles was starting to hurt and threatened to turn my Odyssey into an Iliad (Achilles joke, dw). Between the arse of a tendon and the tender arse, I could see the remaining kilometres were not going to be comfortable. Still, it could be worse, at least I had plenty of gears to work with. About three hours later my front mech broke. Thanks Shimano. I unplugged it and carried on with my new 1x setup, reflecting that at least I must have used up all of my bad luck. It was around then that the torrential rain started, and didn’t stop for long for the next 12 hours.

It was hard rain, mountain rain. The kind that bounces off your face and gets behind your glasses so that on the descents you have to screw up your eyes to keep the grit out. I kept pedalling, aiming for the final control point about 100km from the finish line. It was a mountaintop hotel, and visions of a roaring fire, good food, and 20 minutes off the bike kept me sane. When I arrived, I found three volunteers huddled in a damp shed out the back of a closed hotel. I got my brevet card stamped and kept moving, descending and heading to the final parcours on some pretty decent gravel tracks. I had about 80km to go when the sidewall of my brand new GP5000TR rear tyre (headline: Stronger Sidewalls) blew out. Fortunately, my carbon rim hitting the rocks uncushioned at 45km/h didn’t faze my Zolla rims and I stopped to take stock.

To briefly sum up, I was in a forest somewhere on the Czech/Polish border, night was falling, and I was several hours’ walk from the nearest anything. A quick assessment showed my options were:

A. Give up and cry

B. Improvise a tyre boot for the enormous hole where my tyre used to be, stick my only tube in, and pray for no more punctures

At this point, I was too jaded to bother with column A so went straight onto B. The patch held, and with the exception of more torrential rain, relentless terrain, and a puncture with 50km remaining which meant I had to stop and put air in my tyre every 10km, the finish parcours was a cinch…

Finally, about 0130 I arrived. 8th place, in 3 days and 20 and a bit hours. It’s easy to become distracted by top 10 finishes and feel the pressure to win or scratch, but in ultra distance, riding the best you can in the circumstances, overcoming challenges, and staying the course to finish is a victory in itself. I could probably have done without the saddle sores though.

Photos, thanks to Race Through Poland (https://www.instagram.com/racethroughpoland/) and their fantastic photographers: